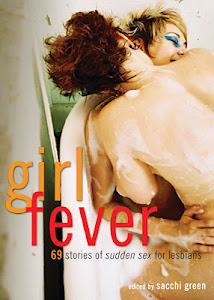 A decade ago, my first piece of erotica was published. One of the other contributors to that anthology was Sacchi Green. In the years that followed, almost every time I made my way into a new erotica market or gave a reading, Sacchi was there. (She lives in Western Massachusetts, too.)

Then Sacchi began editing her own anthologies ("cracking the editorial whip" as she puts it), and I've been lucky enough to be a contributor to a couple of them. She first co-edited very successful anthologies on themes such as cowboys and bikers before going solo to edit anthologies on lesbian cops, coming out stories, and more. I have been inspired and impressed by her dedication to finding good writing and a presenting a fluid consistency of theme.

Sacchi's latest anthology is Girl Fever: 69 Stories of Sudden Sex for Lesbians. I'm particularly pleased to have two pieces in Girl Fever because these were the first pieces I wrote after being unable to write or edit professionally from 2007 to 2010, when Lyme disease was taking its biggest toll on my brain and body. It was great to re-enter the world of literary erotica under the auspices of an editor with whom I felt such trust and comfort.

Now Sacchi has agreed to answer my questions about her work as a writer and editor of lesbian erotica (and other genres). Enjoy!

Sharon: The first thing I noticed when I got my copy of Girl Fever was that it's huge! Sixty-nine (even very short) stories of wall-to-wall, throw-down, wet, juicy sex is a whole lot of sex. What I enjoyed most about this book was the variety. Did the number of pieces you were selecting make this a more challenging project than your other anthos? Besides the sexual element, what were you looking for to keep the reader engaged in each story and eager to move to the next one?

Sacchi: I always look for variety, on general principles; anything can get boring if it's repeated too often in succession. I look for variety in a number of aspects. Since this is erotica, the sex is a major factor; I look for a certain mix of mild kink, edgeplay, sweet romance, vanilla, first-times, long-term partners, etc. I especially like things I've never encountered before, like, for instance, that story you wrote about sex during an MRI.* I also look for variety in settings, especially settings vividly evoked in a minimum of words. Different types of characters are good; not just dominant, submissive, butch, femme, andro, but earthy, intellectual, geeky, older, on the young side, introspective, outgoing -- the list could go on and on, and there can be all sorts of combinations. Varying lengths are important, too, even in a book with 69 very short stories. And then there are matters of tone, voice, mood, atmosphere -- lighthearted, heavy, humorous, anguished, intense, casual, and my favorite, indefinable.

Sharon: Back to the topic of variety! In addition to beds, bathrooms, elevators, and boardrooms; planes, trains, and automobiles; this book contains a mix of fantasy/myth, realism, sf, and a huge range of locales and situations. I know that in your writing, too, you have quite a range -- science fiction, fantasy, historical fiction, all of which you are able to mix with erotica. Did you solicit spec fic pieces, or did they arrive by luck and connection? Do you have a favorite genre or mix of genres to write (or to read with an eye to publishing)?

Sacchi: For this book, I didn't ask for specific genres, and wouldn't have taken too many stories of, say, space opera or fantasy, but I was happy with the ones I got. In general my main publisher doesn't like much along the lines of speculative fiction, except in specific cases like vampires, shapeshifters, steampunk, fairy tales, whatever seems popular at the time, and all their books like that have been edited by other people, even though I expressed interest in doing some of them. I'm to some extent pigeonholed with traditional lesbian themes, but that's not really limiting. I do write stories myself for some of these, and slip in the occasional historical piece, too. Historical fiction and fantasy are my favorites, but they tend to work best at novel length, and I'm not necessarily a novelist. I've been working with a smaller publisher, though, Lethe Press, where I've edited an alternate history anthology (Time Well Bent) and am co-editing a year's-best anthology of lesbian speculative fiction, Heiresses of Russ 2012, due out on October.

Sharon: I love your historical fiction. There are two pieces I remember from erotica anthologies that have stayed with me for years. One was the title piece from Lipstick on Her Collar. The other was from the perspective of an American woman who had an affair (while she was a WAC) in England during World War II, I think?

Sacchi: Yes, my Lipstick on Her Collar story was set during the War in Vietnam.

The other one you're thinking of is "To Remember You By." She was a WAC nurse, and the other character was ferrying new fighter aircraft for the RAF, as many Americans and Canadians did before similar groups of women pilots were formed in the US. That's one of my very favorites, along with a sequel I wrote about them 35 years later in Alaska, where the pilot had established a career, and gained a partner, a Russian defector who had flown bombers with the "Night Witches" during the war. This was the nearest I ever came to writing a threesome. I did large amounts of research for all these stories, and will probably use some of it again. In fact, one of my rare hetero stories, coming out in November in Kristina Wright's Duty and Desire from Cleis Press, is about a "night witch" shot down near the Russian/German border and rescued by a Russian sniper recovering from severe injuries in the Siege of Stalingrad.

The two stories about the WAC and the pilot are the first and last in my collection of my own work, A Ride to Remember, from Lethe Press. One of these days I'll write a third one, taking place between the other two, when the American pilot rescues the Russian one, who has crashed on the ice shelf near Nome.

Switching gears, I'd like to talk a bit about disability in erotica since that's a theme on my blog. I've never before been in an erotica anthology that had two stories with disabled characters. Thus, I was pleased and surprised to discover in Girl Fever Fran Walker's "Cats and Dogs," which has a protagonist who uses a wheelchair and a service dog. Do you think it's becoming more common to have disabled protags in erotica anthologies? As an editor, how do you approach stories with a character with a chronic illness or a disability?

Sacchi: I look at stories with characters with disabilities with the same critical eye that I use for any other work, but I'm very glad to see them. For one thing, disabilities (like alternative gender presentations) contribute to the complexities of stories in various ways. Not only are the characters personally influenced by their situations, but their worlds and the ways they navigate them are more complex than for most people, and this adds depth and interest to their stories. Another aspect is the journey a reader make take from initially seeing someone as "other" to recognizing a fully shared humanity, with an extra dose of respect. Not every story has to be "educational" in this way, of course, but it's good for readers to empathize with all sorts of well-written characters.

Sharon: You've contributed to a stack of erotica anthologies that are "breast-high," according to your blog. (I remember when it was thigh-high! I think you really should post a picture of yourself on your blog with your boob-high stack of books.) How did you go from being a contributing writer of lesbian erotica anthologies to being an editor of them?

Sacchi: Well, as you know, I'm not very tall, so "breast-high" doesn't imply all that much altitude. I toyed with the idea of editing for a while; I never wanted to be a teacher, exactly, but I do read with a sense of what's good writing and what isn't, and of how to fix what needs fixing. Then another writer with an anthology idea tracked me down and talked me into co-editing Rode Hard, Put Away Wet: Lesbian Cowboy Erotica with her, since she had experience with training horses and cowboyin', and I had more on the writing chops and contacts side. We did four books together, but we've both moved on.

Sharon: Last question. In Girl Fever, I found many familiar names -- writers well-known in the field of lesbian erotica -- but I also came across some writers I've never read before, whose stories I really enjoyed and whose writing took me by surprise. What surprised you the most in editing this anthology?

Sacchi: I was surprised (and relieved) that I got so many good stories, and, as you note, by so many by people I'd never encountered before. Maybe it was because some of them felt that their chances were better for a book with so many stories, or maybe they felt more up to writing short pieces than long ones; I don't know. But it does take a special skill to present well-developed characters and settings and scenes in a concise way, and I think that sometimes the amount of focus required on the part of the writer makes a better story than they'd produce with more room to fill.

Sharon: Thank you so much for your time, Sacchi!

Sacchi: Thank you, Sharon, for the great stories you've written for me, and for all you accomplish.

*The MRI story Sacchi is referring to is called "Imaging," and is in Lipstick on Her Collar. That was a fun one to write. I took on a literary no-no and created a not-very-likable protagonist -- a disabled dyke who is an unreliable narrator. I was glad Sacchi took a chance on it.
Posted by Sharon Wachsler at 10:05 AM 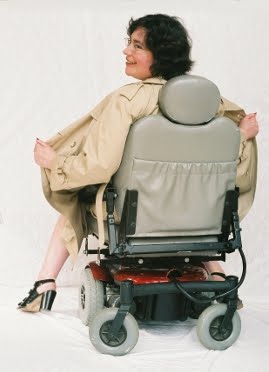